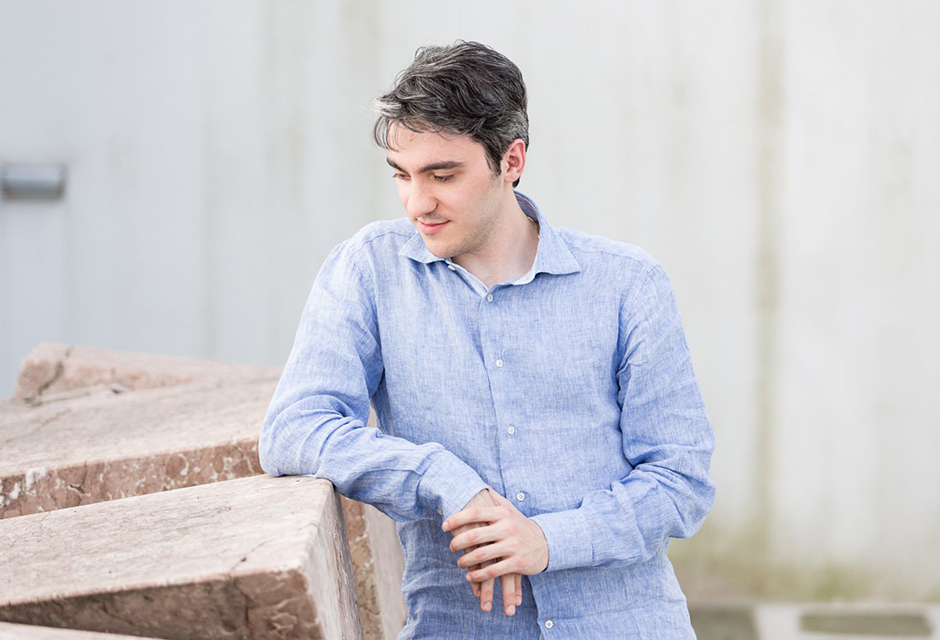 Alexander Gadjiev owes the first to his family, with both parents being piano teachers and musicians, and the second to Gorizia – his city of origin – a natural crossroads of peoples, cultures and languages. These factors have both had a determining influence on his natural ability to absorb, process and rework, to his own taste, different musical styles and languages. Tutored by his father, a well-known Russian teacher, Alexander played for the first time with an orchestra at the age of nine, and held his first solo recital aged ten. He was awarded his diploma at the age of seventeen, with the highest marks and honours. This allowed him to participate in the Premio Venezia – a competition reserved for the best young talents in Italy – and to win the 30th edition of the award.

Alexander has just received the Second Prize and the “Krystian Zimerman Prize for the best performance of a Sonata” at the”18th Chopin Competition” in Warsaw.
A few months before he won the First Prize and several other prizes the 2021 Sydney International Piano Competition.

The first period instrument quartet to be selected as BBC New Generation Artists, the Consone Quartet are fast making a name for themselves with their honest and expressive interpretations of classical and early romantic repertoire. Their debut CD, released in 2018 on the French Ambronay Label, explores music by Haydn and Mendelssohn. It was met with great critical acclaim as a recording “that instantly leaps out of the stereo at you as something special” (The Strad, 2019).

Formed at the Royal College of Music in London, the Consone Quartet are winners of the 2016 Royal Over-Seas League Ensemble Prize in London, having previously been awarded two prizes at the 2015 York Early Music International Young Artists Competition, including the EUBO Development Trust Prize and a place on the EEEmerging Scheme in France.

Jan Zahourek was born in Denver Colorado and grew up in New York City and Jersey City, and Amherst Massachusetts.
It was in New York City and Jersey City that Jan was exposed to the wide spectrum of music and art that probably helped to create his interest in and passion for music.
He was offered a full scholarship at the University of Massachusetts at Amherst for a Master Degree in doublebass performance, at the end of which he moved to Italy. After 5 years in Padova, during which he played extensively with the chamber group Ensemble Musagete, as well as other small orchestras around Padova and the Civic Wind Band, he decided to move to London. Jan was offered another full scholarship to complete a Master Degree in viola da gamba at Trinity College of Music, and he meanwhile played in London, England and the world with orchestras and Ensembles like the Philharmonia, the Orchestra of the Age of Enlightenment, Solomon’s Knot, and many others.

Established two decades ago, Radio 3’s New Generation Artists scheme is internationally acknowledged as the foremost scheme of its kind. It offers a platform for artists at the beginning of their international careers. Each year six musicians join the scheme for two years, during which time they appear at the UK’s major music festivals, enjoy dates with the BBC orchestras and have the opportunity to record in the BBC studios. The artists are also encouraged to form artistic partnerships with one another and to explore a wide range of repertoire, not least the work of contemporary and women composers. In recent years Radio 3’s New Generation Artists have appeared in festivals or concerts in Aldeburgh, Bath, Belfast, Birmingham, Buxton, Cheltenham, Edinburgh, Glasgow, Hay-on-Wye, Orkney, Ryedale, Southampton and Stratford-upon-Avon as well as at the BBC Proms. Typically, the artists selected will have been prize winners at major international competitions such as the Tchaikovsky, Liszt, Ferrier or Cardiff Singer of the World. However, the BBC New Generation Artist scheme is not itself a prize, rather it offers a a unique two year platform on which artists can develop their prodigious talents. Not surprisingly, the list of alumni reads like a Who’s Who of the most exciting musicians of the past two decades.