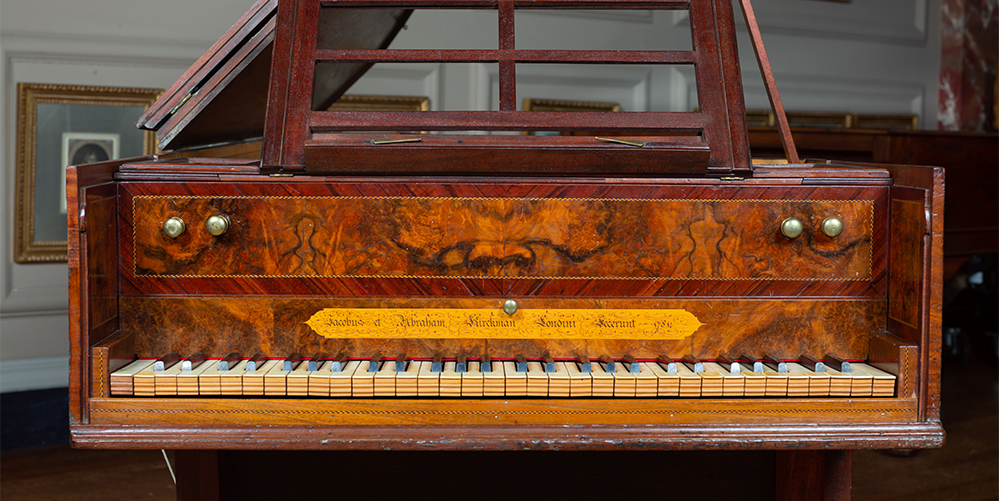 Harpsichord-building in London during the eighteenth century was dominated by two great makers, Jacob Kirkman from Alsace and the Swiss-born Burkat Shudi. Both learnt from the same master, Hermann Tabel, who had been apprenticed to the Ruckers/Couchet workshops in Antwerp. Following Tabel’s death, Kirkman gained something of an advantage over his rival by marrying Tabel’s widow and thereby acquiring all the seasoned timber and customers of a very successful business.

Kirkman’s instruments were highly thought of; indeed, George III offered the maker a Ruckers harpsichord in return for a double manual instrument for Queen Charlotte (that Ruckers is now in the Victoria and Albert Museum). Kirkman’s business acumen is vividly illustrated by his reaction to an increasing infatuation of fashionable ladies to the ‘English Guittar’ which threatened to impinge on his market. He bought up a large quantity of the guitars and distributed them freely to milliners and ladies of the street. The craze was quickly abandoned by society.

In 1772 Jacob was joined by his nephew, Abraham, who eventually succeeded him and took this distinguished name into the age of pianofortes. This single manual harpsichord is inscribed on a boxwood plaque inset into the walnut veneered name batten: Jacobus et Abraham Kirckman Londini Fecerunt 1781. The four highly unusual drawers incorporated in the stand are integral to the original instrument. Another example of a harpsichord stand fitted with drawers can be seen in the painting by John Greenwood of John Richard Comyns of Hylands, Essex, with His Daughters, 1775.