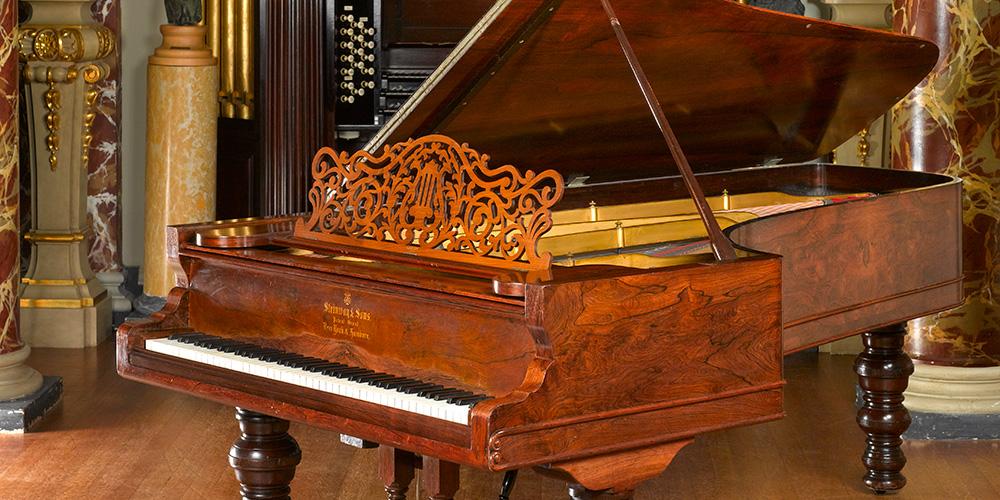 35 Steinway, detail of the soundboard

The Steinway concert grand piano in the Cobbe Collection is one of the earliest to survive. In 1853, Steinway had opened their first factory in New York. By 1859 they patented a model of grand piano that combined a cast iron frame such as had been employed by Chickering of Chicago, with the innovation of ‘overstringing’, in which, for the first time in a grand, the bass strings cross over the tenor region. This makes it possible for the tenor strings to be closer to their optimum lengths while the bass strings have a more favourable position on the soundboard,
resulting in a powerfully enhanced sonority. The new overstrung Steinway model won a first rank medal at the London Exhibition of 1862. The makers claimed that each instrument contained, including the screws, 40,000 parts, and that each one took a year to make.

The Cobbe Collection instrument dates from 1864, and is basically the 1859 model with a few action improvements. Its case is of richly figured rosewood and its soundboard is gilded – an expensive model that would have been priced at $1300, equivalent to £31000 of today’s money. Many would claim that with this model Steinway created, in effect, the modern piano.

MacDowell – To the Sea