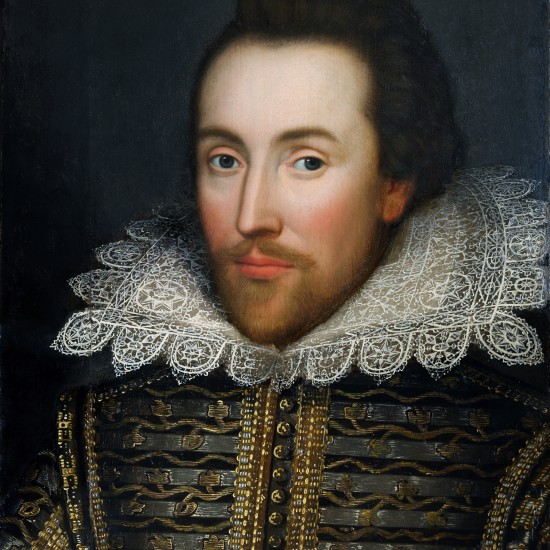 Click/Tap the image to see the enlargement

This world famous picture is arguably the only portrait of Shakespeare to have been taken from life. It has descended in the Cobbe collection for nearly three hundred years together with a portrait of his only literary patron, Henry Wriothesley, 3rd Earl of Southampton, to whom it probably belonged. They were inherited by Archbishop Cobbe (1686 – 1765) whose childless cousin had married a great-granddaughter of the Earl. The picture was proliferated in several near-contemporary copies, the majority of which have always been known as Shakespeare.

At Hatchlands Shakespeare comes together with Titian in a unique way, since near the portraits of Shakespeare and his patron hangs Titian’s poesie [poem painting] Venus and Adonis, one of five paintings currently in Britain from Titian’s celebrated series based on Ovid’s Metamorphoses. The subject was Titian’s most celebrated composition, particularly after he sent a version of it to Philip II of Spain, then in London.

The subject of the painting was also treated by Shakespeare in his famous erotic poem Venus and Adonis. The most frequently reprinted of all his writings in his lifetime, it may well have been inspired in part by Titian’s painting. The narrative of both the painting and the poem departs from Ovid’s text and has Adonis relinquishing Venus’s embraces to go hunting; he then meets his death, gored in the groin by a wild boar, and is transformed into an anemone [flower]. First published in 1593, the poem is dedicated to the Earl of Southampton, and the portrait of the young Earl in the Cobbe collection shows his effeminate, Adonis-like appearance at precisely that time .

The Cobbe portrait of Shakespeare is inscribed with the words Principum Amicitias, a quotation from an ode by Horace that was dedicated to a playwright. They refer to ‘the alliances of Princes’ – perhaps to be taken as an allusion to the Earl of Essex’s rising of 1601 in which Southampton was closely involved and which led to Essex’s execution and Southampton’s imprisonment. Shakespeare and his acting colleagues were [marginally] implicated because of their performance of Richard II, a play in which the monarch is murdered, especially commissioned on the eve of the rising.